Steve Snedeker Director- Co-founder of the MN Sting, now MN Bombers, has coached with the program for 15 years and brought a team to nationals every year, coached at Bethany Academy for 6 years (5 years as the head varsity coach), Lakeville North, and is currently on the coaching staff at Roseville High School.  He has been coaching fast pitch softball for over 20 years.  We are pleased that Steve will serve again as our Program Director and also serve on the Board of Directors.

Kayla Hatting- Player Development and Recruiting Advisor- Kayla will be starting her 4th year with us and we couldn’t be more blessed to have this amazing human in our organization. If you have met her, you know. She is the Head Coach at St. Olaf College in Northfield, mentoring and coaching those young ladies through their college academic and athletic career. Prior to joining St. Olaf Kayla was an Asst Coach at Augustana University. She was also a 4 year player at Luther College in Decorah, Iowa where they won 4 straight Regional Championships and made 4 straight appearances at the National Tournament and she was a four-time NFCA All-America Scholar Athlete.

Kayla will step into a role driving our Player Development and will serve as the Recruiting Advisor for our organization. She is in a unique position to support the recruiting needs of our players since she was a college player and is a college coach. Kayla will continue to serve on our Board of Directors.

Kayla will also lead our Catchers training this year!

Julie Graf 18U National Team Co-Head Coach- we are incredibly excited to have Julie step into a Head Coaching role for the new season! This will be her 3rd season with us.

Julie is a Washington state native who played for the NW Lady Sharks and the WA Absolute Blast. She just completed her senior year at St. Olaf College and will be returning next year to be a super senior, where she pitches and plays outfield for the Oles. In her first year at St. Olaf Julie was the MIAC Rookie-of-the-Year and MIAC Pitcher-of-the-Year. As an Ole Julie is a 3x All-Conference player, 3x All-Region player, an NFCA All-American, holds the MIAC career strikeout record and has broken almost every pitching record in St. Olaf Softball’s record book. In the 2019 season, as a Junior, she was the NCAA Division 3 season leader in strikeouts per 7 innings at 13.5 Ks/7 innings! She is a pitching instructor in the Northfield area and is passionate about helping players develop and work towards their potential both on and off the field! She is a wonderful leader, mentor, and role model for young women and we could not be more thrilled to have such a gem in our organization!

Julie will also be leading our pitching training this year!

Leah Fletcher- 18U National Team Co-Head Coach- Leah is back for her 2nd year with our program, now as a Head Coach!  Leah has also coached 2 seasons as a 14U coach, and one season as a 16U coach in Red Wing. She also coached in River Falls, WI and Goodhue, MN. where she helped Goodhue reach and win the subsection championships. Leah focused on fundamentals and the ‘little things’ that push athletes to be their best. Hard work is important on and off the field; She asks it from her players and always tries to set that example. Softball has been a part of Leah’s life since she was young. She also played at the collegiate level at St Mary’s so she knows what it takes! She enjoys working with athletes to pursue and achieve their goals of taking their game to the next level. We are excited to have Leah step into a Head Coaching role. She is an amazing role model for our players!

Bob Makela- 16U National Team Head Coach     Bob will be returning for another year of Coaching! He holds 8 state titles, 13 state championship appearances, 1 Midwest National Championship, 1 USSSA Nationals 2nd place, over 800 wins as a head coach, finished 2nd at 18U A “AFA” nationals with a 16u team and he played fast pitch for 12 years with a .400 average and 2 world tournaments. He has had 2 teams ranked nationally by Flo Softball.

Coach Makela is one of the founders of the Sting Non-Profit organization, now the Minnesota Bombers. Bob has been responsible for supporting over 100  players recruited into their college athletic home as part of the MN Sting/Bombers organization. He excels in the recruiting space and takes a lot of pride in his work.  A recent team was 100% recruited at the D1 and D2 levels!

We congratulate Bob and his current 16U team on their 2nd Place finish at the USSSA Nationals in Kansas, July 2020!

We are glad to have Bob back on the coaching staff and also serving as our Treasurer for the organization. His energy and passion for the Minnesota Bombers  is endless!

Heather Thurow 14U Gold  Co Head Coach - We are excited to have Heather join the Minnesota Bombers staff!  Heather has over 20 years experience coaching Softball at the club, traveling and MS levels. She also coaches HS volleyball at Minnehaha Academy where she is an assistant preschool teacher.  Heather played college softball at UNW St Paul where she was a middle infielder and pitcher, as well as a bunter/slapper.
Heather is excited about coming out of retirement after taking time off to watch her girls play softball and son finish his HS baseball career and is excited to join the Bombers!

Cliff Yandle 14U Gold Co Head Coach - Cliff has coached with multiple club organizations over the last 6 years as well as Lakeville Softball where he was also the Player Development Director, he is also on the Coaching Staff for Lakeville South. He played collegiate baseball at Bemidji State University and currently plays for the Lakeville Lobos 35+ men's baseball team. He has a saying that works well with girls and it has been a motto of mine for many teams I have coached, "Practice like you play, Play like you Practice". If you practice great you will play great. He also said, “I love this game and all it has to offer and I have had a lot of success in playing and coaching. I am very excited to join the Bombers team!”

Brian Jeanson- 14U National Team Co-Head Coach  We are excited to announce a new addition to our Coaching staff and we are sure you will be as excited as we are! Brian Jeanson will be coaching with us this upcoming season!

Brian has been a mainstay in Minnesota softball for the last several years with two talented players in his family. He always goes above and beyond and has a great presence with both players and parents. Brian has a long coaching history that includes Traveling, High School and Middle School teams. He was also selected to coach a USA All Stars team.

After taking this summer off from coaching, he is really excited for the opportunity to get back on the field. His goal is to make this a challenging, yet fun and positive experience for the athletes. He does that by creating a competitive atmosphere in everything they do.

Coach Jeanson says, "100% effort and positive, can-do attitudes are required. I believe you practice how you want to play, and I will push athletes out of their comfort zone. With that, mistakes can and will happen, I feel as long as you give 100% effort, it is an opportunity to learn and grow as a player, teammate and person. This game is full of life lessons and I take pride in helping our players achieve balance outside of softball as well, by volunteering and mentoring younger girls. After all softball is what they do, not who they are. Go Bombers!"

You can see the passion Brian has for the game and why we asked him to join the Coaching staff! Please join us in welcoming Brian!!

Tom Thole- 14U National Team Co-Head Coach - We welcome Tom to our program! Tom grew up in St. Paul, where he went to Johnson High School and played hockey and baseball. He has two children, Montanna 20 and Caden 18.

Tom played competitive Men’s Fast Pitch for 20 years playing in many national and MVP tournaments around the country. During his time playing fastpitch he was a short stop and his playing experience and intimate knowledge of the game allows him to bring that experience to coaching. In 2006 Tom was inducted into the St. Paul Men’s Fastpitch Hall of Fame.

Tom coached with the North St. Paul Fastpitch Association where his 2015 14UA team placed 1st at state and 1st at NAFA Nationals, finishing with a 51-5-2 record. His 16UA team in 2016 qualified and played in the USSSA World Series in Orlando Florida.

When not coaching, Tom enjoys being out on the lake fishing or on the golf course trying not to make another bogie…

We are excited to have Tom join our staff and bring his talents to the Minnesota Bombers!

Megan Thurow- Head Coach- We are thrilled to have Megan back as part of our coaching staff for the 2020-21 season! Megan is a MN Sting alum and 2015 graduate from Minnehaha Academy. She is a 5 year letter winner and won all-section and all-conference awards 4x each. She also was 2nd team All-State and 3rd team All-Metro her senior year. She holds her school's records for strike outs and ERA. After high school, she played for 2 years at Dakota County Technical College and 1 year at Bethel University. Megan has been a head coach at the 14u/12U level for 3 years and is just finishing her 2nd season with us. Her current team recently took 2nd place at NAFA Nationals and was invited to play in the 14U NAFA Nationals event, they also won Top Tier Fall State and several winter tournaments.

We are glad to have you and your talents in our organization!! 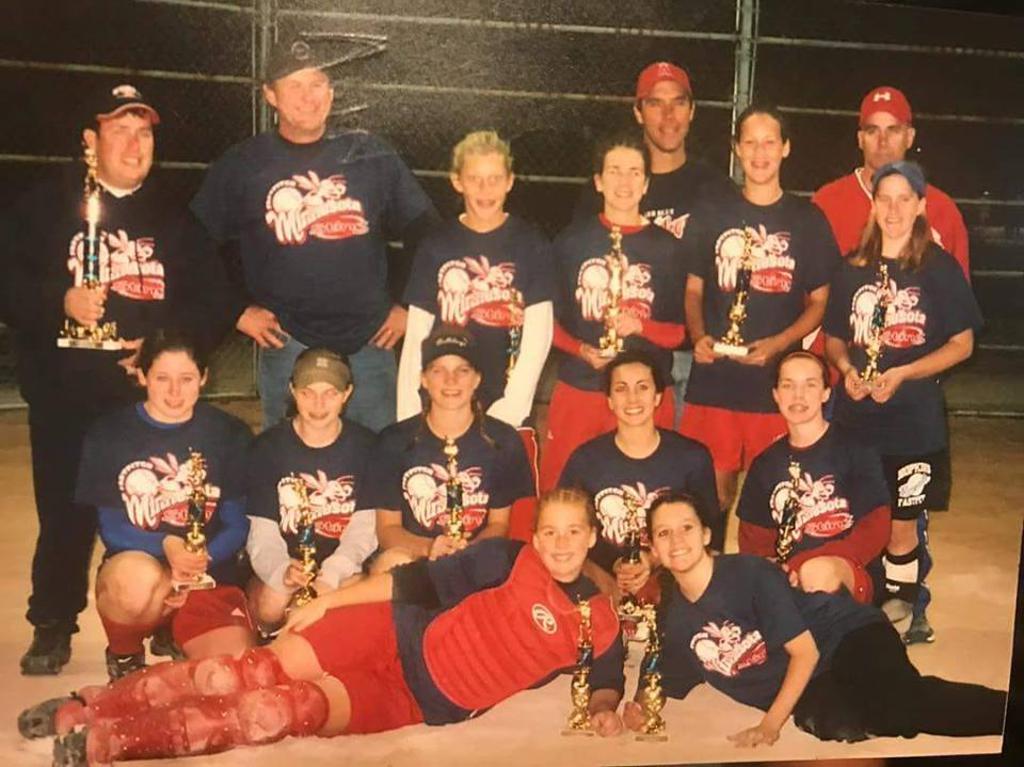 We are growing and are looking for great coaches to add to our Coaching  staff!  We pay on the  high end of the market and have a  long-standing coaching staff, but we need more of you!   If interested contact us at MNBombers@gmail.com and/or call Steve at 952.292.5457.

Club Ball in Minnesota is Changing and It Starts Right Here, Right Now!

Read More About the Bomber Organization

RT @DartmouthSball: We are happy to announce that we are partnering with @BC_Softball for a camp at the @TCSFastpitch Sparkler/Fireworks.…

RT @NDSUsoftball: Don't forget, summer camps are right around the corner! Make sure to sign up at the link below! ⬇️ 🔗: https://t.co/OWXs…

Congratulations to our Minnesota  Bombers players who made appearances in their 2021 State High School Tournaments!

Congratulations to the players that have worn a Sting/Bombers jersey and their appearances in 2021 Regional, Super Regional and National Finals play